With Megadeth’s David Ellefson and Chris Broderick hitting the road on the Jackson Clinics tour, their latest stop was Sweetwater in Ft. Wayne, Ind.

The guys have three more clinics next week, so stay tuned.

In the meantime, David took the time to check in to JacksonGuitars.com and give fans an update as they left Indiana.

Here’s what David had to say:

~ We were up and at it early today, flying from Philadelphia to Fort Wayne, Ind., for our final clinic of the week. Fort Wayne is home to the infamous Sweetwater Sound, which is an AMAZING campus for all things pro-audio and music gear related. I’m told they modeled the building and site after the Google headquarters and let me tell ya, they spared no expense in the theater & sound equipment. For any professional musician, this makes for a really great performance.

After a late afternoon sound check Chris and I did some media interviews for Sweetwater and prepared for our set list for the clinic. One of the really invigorating things about these clinics is that even though we play MEGADETH material for night after night we now know even more about how each other plays by doing it in such a unique setting as these clinics.  This has created a really great dynamic to make each clinic unique with the songs we choose, our Q&A with the audience and even stretching out our own chops each night, too. Even more so as we get to showcase and discuss the high performance details of our Jackson axes with our fans and musicians in attendance. 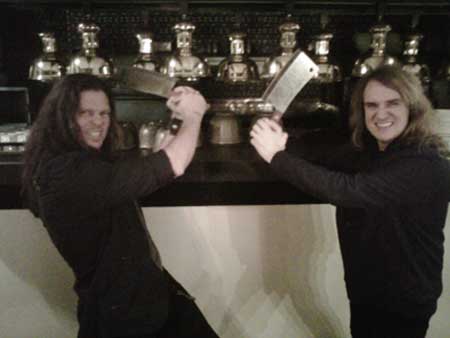 After signing autographs for the 300 attendees tonight we went out to a tasty steak house called the “Cork n’ Cleaver” where the menu is literally written on an actual meat cleaver!!  Following a night of some good food & great company it was time to wind down and prepare to head home for the weekend.

I hope you’re enjoying the photos and video clips from out here on the road. We all thank you for attending the clinics and some up close and personal time with all of you during our travels.