Revocation is currently bringing their brutal brand of metal to the masses with a North American tour in support of their third album, Chaos of Forms.

The Boston thrashers are playing with Children of Bodom through March 4, but more tour dates are expected to be announced.

While on the road, top shredders David Davidson (right) and Dan Gargiulo recently checked in with JacksonGuitars.com for a quick Q&A.

JacksonGuitars.com: What has been the reaction to Chaos of Forms now that you’re playing many of the new songs to live audiences?

Davidson: “It’s been well-received so far.  I’m happy it’s out there and people are listening.  Things have been positive.  Playing it live, I think the reaction has been great.”

Gargiulo: “When Dave says, ‘This next song is off Chaos of Forms,’ you can feel the audience get up for those, so you know it’s going to go over well.  That makes you feel good when you’ve got new material.”

What is the songwriting process like for you guys?

Davidson: “I write a lot of the riffs, so I’ll come in with general ideas.  Just saying, ‘Hey guys, here’s what I think this riff should sound like, and here’s my idea about the chorus.’ Then, we’ll all jam together from there as a group.  All the bells and whistles come together at that point, whether we’re going to harmonize something or not, adding solos. Of course, the vocal arrangement comes in at the end, but it all starts with the riff.”

Gargiulo: “After the songs were mostly fleshed out, Dave came to me and we put our heads together about my solos and what some of the harmonies sounded like.  So, Dave starts doing the work and we add the sprinkles later as a band.”

How is that different from other bands that rely on a vocal hook more than writing through their guitar?

Davidson: “Since we don’t sing and aren’t focused on vocal melodies, we are bringing the melody out from our guitars.  Jackson’s helped inform that sound.

“For me, I get inspired by the instrument itself.  If I’m just playing at the house and get my Warrior out, it just inspires me to write that killer riff because it’s so ‘metal’ looking.  The shape alone makes me want to write some thrash-metal riffs.  It almost starts with that visual appeal, pulling the guitar out of the case and plugging in.”

How does your Jackson inspire you, Dan?

Gargiulo: “Having a guitar that plays really well helps, when you can really dig in and bend those high notes.”

What’s coming up next for Revocation?

Davidson: “We’re going to finish out our tour with Children of Bodom.  We’ve got some things on the horizon, but nothing we can announce just yet. Just know that we’ll be on the road for a good part of 2012.” 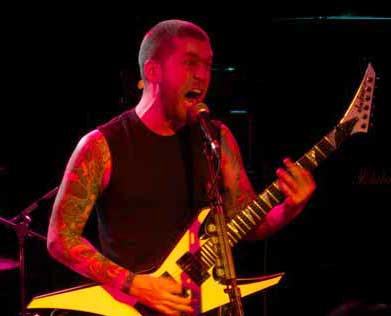