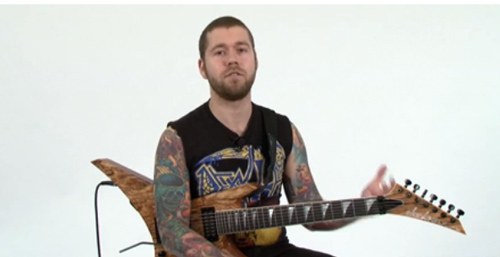 For all aspiring thrash guitarists out there, Revocation frontman Dave Davidson is back with a new Guitar World lesson.

In this edition, which is featured in the May issue of the music mag, he focuses on the riffs from “The Hive,” a track from his band’s recently-released self-titled album.

“The song is built from an array of primary riffs performed with fast consecutive downstrokes, combined with some tremolo picking and other very specific pick-hand techniques,” he wrote.

“To me, a relentless downstroke-driven pick attack is the only way to get certain riffs to jump out of the guitar with the aggressiveness necessary to make them sound as heavy and menacing as possible.”

Watch the lesson after the jump and click here to pick up a copy of the latest Guitar World.