Learn ‘Labyrinth of the Eyes’ with Revocation’s Dave Davidson 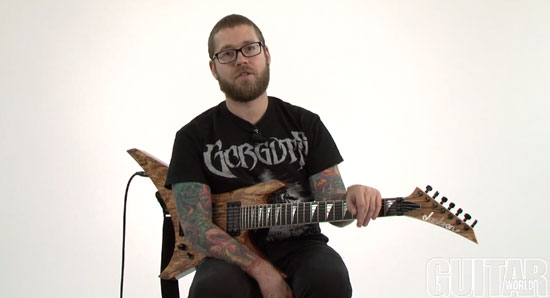 Dave Davidson’s latest lesson from Guitar World is here, and the Revocation frontman runs through the second part of “Labyrinth of the Eyes,” which comes off the thrashers’ latest album, Deathless.

Previously, he performed riffs from Part 1 in a 12/8 meter, and now he’s back with the remaining primary riffs, which introduce an unexpected twist by shifting to two bars of 3/4 followed by a bar of 2/4.

“One could alternatively count these phrases as being in straight 4/4 time, as two bars of 4/4 totals the same number of beats, eight, but once you play through these figures, I’m sure you’ll appreciate the rhythmic merit of utilizing the shifting meters, which correspond to the phrasing in a more logical way,” Davidson wrote.

Click here for part one and watch Part 2 after the jump.

Get your own copy of Guitar World here.