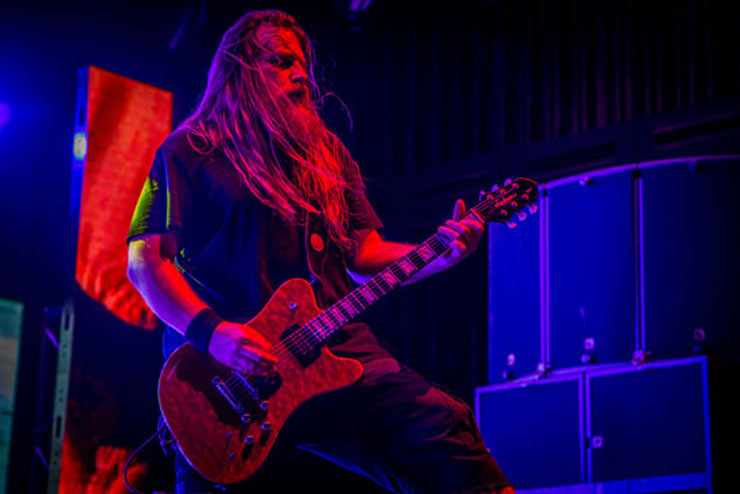 As an ominous dust storm rolled towards downtown Phoenix, a massive crowd at Ak-Chin Pavilion waiting for Lamb of God to take the stage.

Already on the searing hot summer evening, Motionless in White and Bullet for My Valentine had brought a considerable level of metal to the desert amphitheater, but Lamb of God certainly ratcheted things up once the sun went down.

Fresh off the release of new album VII: Sturm und Drang, Lamb of God was absolutely crushing in their opening slot for headliners Slipknot. From the first notes of their tight 10-song set, the Virginia hellraisers unleashed a brutal assault on the senses. 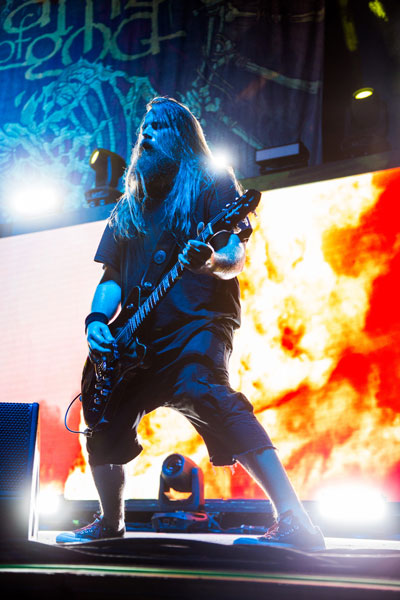 The band was backed by large video boards that depicted scenes of soldiers engaged in war, buildings crumbling and fiery explosions. Frontman Randy Blythe – decked out in his signature dreadlocks and camouflage shorts — stalked the stage like a wild-eyed tiger, roaming from left to right and regularly jumping on a riser to scream into his microphone.

Lamb of God began with the gut-punching “Walk with Me in Hell,” a classic off 2006’s Sacrament that immediately captured the audience’s attention. That was followed by the frenetic “Now You’ve Got Something to Die For” and the brand-new “Still Echoes” and “512.”

The latter was a true show highlight, as the track featured a searing solo from guitarist Mark Morton on his signature Jackson Dominion.

As the Lamb of God set wore on, the fans out on the sprawling lawn began to spark small bonfires – quickly doused by fire marshals – and those up front thrashed more and more aggressively. Fueled by Lamb of God’s frenzied two-guitar attack and punishing percussion from drummer Chris Adler, the rage continued to boil, only taking a brief break to cool when someone was injured in the pit during finale “Redneck.”

But once that mosher was cleared out of the way, Lamb of God picked things back up with ease, ending their 50-minute appearance to the hoarse cheers of everyone in the house.

Would there be any more energy left over for Slipknot? Of course, as their undeniably loyal fanbase repeatedly chanted the band’s name not long after Lamb of God walked off – and that’s not to mention the several in attendance who wore masks of their favorite Slipknot member.

Donning their traditional matching jumpsuits and monstrous masks, Slipknot ran through several fan favorites like “Sarcastrophe,” “Psychosocial” and “Custer,” in addition to new gems like “Killpop” and “The Devil in I.”

The Iowa metallers also didn’t skimp on the theatrics, with pyro and rotating percussion rigs on either side of the stage.

In all, it was a relentless hurricane of metal, spurred on by the hard-hitting music, the passion of the fans and the blustery gusts of sand that billowed through the venue.